Why I’m Involved With Best Buddies

Hola! My name is Nick Balkevicius, and I have been involved with Best Buddies for 5 years. Being a part of Best Buddies has been one of the best things I have ever done. It has taught me to treat all human beings with the respect that they deserve, and that nobody deserves to be picked on because of what they look like or who they are. Here is the story of how Best Buddies entered my life.

Walking down the hallways of my middle school, I would watch students with disabilities get bullied on a daily basis. They were getting bullied to the point where they were afraid of going back to school. At the time, I was just a regular 8th grader who didn’t worry about life outside my own. All I cared about was girls, my appearance, and who I hung out with. I’m ashamed to say that I stood by and did nothing to stop the bullying that went on in the hallways.

One day, my mom invited me to her school’s Best Buddies party. To be honest, I really didn’t want to go. I didn’t know the people there, and those type of things didn’t interest me. But when I got there, my life was changed. I finally realized that what was happening at my school was wrong.

I thought to myself, what if I knew could make a positive change but was too afraid to take action? I felt upset at how selfish I had been. I was changed after that; changed into a person who felt more empathy for everyone in the world. I could no longer stand by. I had to take action.

The next day, I went on my high school’s website to see if we had a Best Buddies chapter. Unfortunately, the chapter at my school had shut down the year before. I made a call to the Best Buddies Indiana office to ask how I could get a chapter started at my school, but what I got was some bad news: the state of Indiana was not starting any more chapters because of the economic crisis. I had to understand and be patient.

In October of my freshman year, I received a call from Best Buddies telling me that we could start a chapter at my school. I was so excited that I started jumping around in my room and yelling “yes!” at the top of my lungs. I was super happy.

After that call, I realized that I had a lot of work to do now. I had to create a constitution that I had to present to the school board for approval. Once they approved my chapter, I then had to go find two teachers to sponsor the club. All of this was accomplished during my freshman year. By February of 2010, I had a successful chapter with 18 matches.

When I started the chapter, I chose Joseph Coy as my buddy. He likes, swimming, watching movies, hanging out, and watching football games, just like me. Whenever we’re together, we always have a good time.

I love Joseph like a brother because he’s always there for me. I have known Joseph now for 12 years, and everyday is an adventure with him. He is the reason I continue to be involved with Best Buddies. 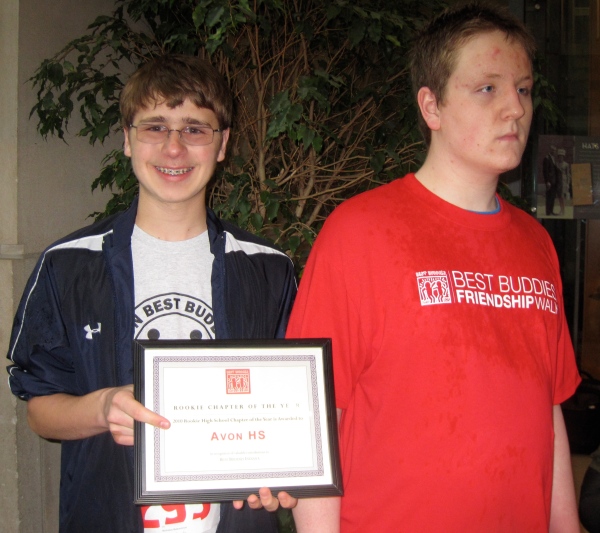 In 2011, I encountered a big challenge at my school. What I thought was going to be a normal Monday turned into one of the worst days of my life. That Monday, we held an officer meeting to discuss next year. At that meeting, the teachers announced that they were going to discontinue being associated with Best Buddies. I felt blindsided, and let down.

I felt that all the work I had done to start that chapter was going down the drain. I was very upset with the decision made by the teachers. I emailed everybody I knew, including Anthony Kennedy Shriver, and told them my situation. A week later I had a huge stack of letters, letters that said they would help get my chapter back, but the chapter was never returned to my school.

That is how I got involved with this amazing organization, but that is not where it ends. Since my chapter was shut down, I have not stopped following the mission of Best Buddies. In a way, I feel that my story with the organization will never end.

In 2010, I participated in the Eunice Kennedy Shriver Challenge that was held in Washington D.C. Being a part of that event was life-changing; I got to run in the nations capital for a cause that is oh so dear to my heart, and it made me want to get more involved. As I result of that, I joined the student committee for the 2011 Best Buddies Challenge: Washington, D.C.

I continued my involvement by volunteering at the 2011 Best Buddies Leadership Conference (BBLC). This year will be my second year attending as a volunteer.

I’m looking forward to seeing more talent attendees at BBLC, like my friend Dan Bivins, who I was paired with last year in a speech writing class. I never thought that the speech he wrote would be delivered at the BBLC closing ceremonies, but when I saw him up there, I cried. I was so proud and happy for him. This young man that I met the day before turned out to be one of bros. Just as my buddy Joseph, I talk to Dan all the time.

As I said before, I will never stop living the Best Buddies mission. The mission is truly embedded into my blood, so much so that I am working on a documentary solely dedicated to the mission of Best Buddies. I want the world to know about this amazing organization.

This is the end of my story, but just the beginning of my work with Best Buddies….

I'm just an average guy fighting for the rights of human beings all across the world. I'm Nick.
View all posts by nbalkevicius500 »
« Previous post
Next post »

Thought bubbles of inspiration, attempted humor, and most likely a lot of pictures and music. (WARNING: You are the only one reading this.)

Every person is an equal member of the human family.