In celebration of Best Buddies Month we will be showcasing outstanding volunteers, employers, and supporters of Best Buddies every Monday as part of our Monday Mission Moment series.

We are excited to introduce you to Paige Randolph from the Purdue University chapter in West Lafayette, Indiana. Paige has been a volunteer with Best Buddies for eight years and is currently a senior who will be graduating in May with a nursing degree. Please enjoy reading about Paige and her dedication to Best Buddies!

END_OF_DOCUMENT_TOKEN_TO_BE_REPLACED

Your Best Buddies Experience Matters To Me, Here’s Why… 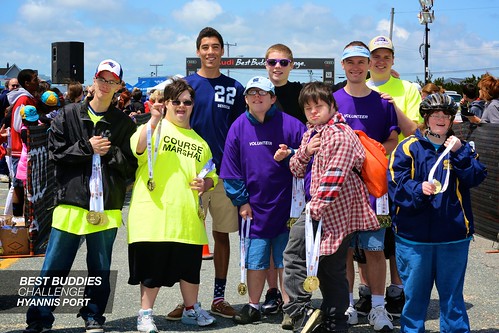 I wanted to share with everyone the below message from one of my staff members.  It’s these stories that continue to inspire me and motivate me to ensure that we keep the Best Buddies mission alive. END_OF_DOCUMENT_TOKEN_TO_BE_REPLACED

After reading this, we’re glad to be a part of the Facebook community! Check out how a photo of Tom Brady and Jon, a Best Buddies participant, made a mother feel after it was shared…

Zeh Lezeh (For One Another)

Recently, I posted a picture of my son, Jon, who has Down syndrome standing with Tom Brady. We New Englander’s think of him as the NFL’s best quarterback. While there may be debate on that subject don’t have it with Jon. You will not win.

While where the picture was taken is not critical to this post, it was taken shortly after Jon hit the ceremonial first tee shot at the Best Buddies Hyannis Port Challenge golf tournament in early June.

A few days after the picture appeared on Facebook, I delighted in seeing that there were 119 likes and 15 comments. I read each comment several times and I looked at each person who indicated “like” and remembered how they were in my life.

This is what I found out:

I went to public school with 14 of you in Swampscott, Massachusetts.

Miami, Oct. 28, 2013 — Best Buddies International, a nonprofit dedicated to creating opportunities for friendship, employment and leadership training for people with intellectual and developmental disabilities (IDD), is pleased to announce that Jennifer Davis and Jimmy Jenson, from Los Angeles, Calif.,  will represent the organization and Team USA Endurance in the ING New York City Marathon on Nov. 3. Sponsored by the Anthony R. Abraham Foundation and Virgin America Airlines, the pair will run the exciting 26.2 mile course through the five boroughs of New York City in honor of the Best Buddies mission and for the 800,000-plus individuals worldwide who are impacted by it. END_OF_DOCUMENT_TOKEN_TO_BE_REPLACED

What a great read! This blogger beautifully describes what it’s like to be a part of Best Buddies. After a little reluctance and soul searching, it’s turned out to be one of the best decisions he’s ever made. Wonderful story….

I’m so glad you decided to join me once again (Mom)! Here we go…

People…let me tell ya about my best friend. He’s hilarious, athletic, a real ladies man and has more sports medals than anyone I know. He once danced so hard his glasses fell off. He gets his hair cut in a different style almost every month, but his favorite (and his posse’s) by far is his mohawk. My best friend messages me every day on the ole Facebook and when he sees me at his sporting events, he waves at me and sometimes yells my name to acknowledge my presence. He is 38 years old and has an intellectual disability. He lives at a complex with many other people with disabilities and I consider those people my close friends as well. I am a member of the Best Buddies organization at my university and MY…

Thought bubbles of inspiration, attempted humor, and most likely a lot of pictures and music. (WARNING: You are the only one reading this.)

Every person is an equal member of the human family.